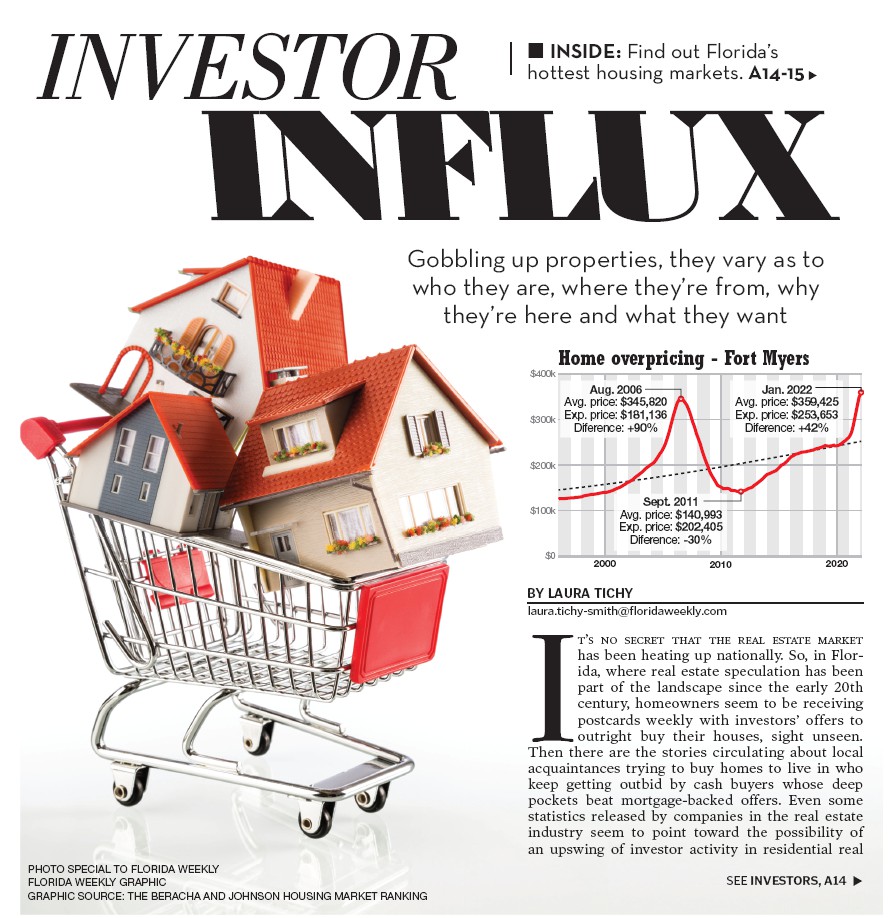 IT’S NO SECRET THAT THE REAL ESTATE MARKET has been heating up nationally. So, in Florida, where real estate speculation has been part of the landscape since the early 20th century, homeowners seem to be receiving postcards weekly with investors’ offers to outright buy their houses, sight unseen. Then there are the stories circulating about local acquaintances trying to buy homes to live in who keep getting outbid by cash buyers whose deep pockets beat mortgage-backed offers. Even some statistics released by companies in the real estate industry seem to point toward the possibility of an upswing of investor activity in residential real estate. All of this information can make it feel as if we’re being invaded by investors, but is that perception accurate?

According to the online national real estate brokerage firm Redfin (www.redfin.com), investors purchased 18.4% of the homes sold in the United States during the fourth quarter of 2021, which was an increase from the 12.6% investors purchased a year earlier. Of those purchases, 74.8% nationally were single family homes. Jacksonville made the top three metro areas in the country in terms of these purchases, with 29.8% of homes bought by investors, which was more than double the number of purchases investors made in the North Florida metro the previous year. Among other Florida cities, Redfin listed investors as making 16.1% of the fourth quarter home purchases in the West Palm Beach metro area, 27.5% in Miami and 24.2% in Tampa.

While those percentages sound daunting, they raise the question of exactly what or whom Redfin counts as an investor. The brokerage states on its website that it examines county home sales records and counts buyers as entities with names that include keywords such as LLC, Inc., Trust, Corp. or Homes, or has a deed ownership code that includes words such as association, corporate trustee, company, joint venture or corporate trust. However, Redfin also states that “data may include purchases made through family trusts for personal use.” 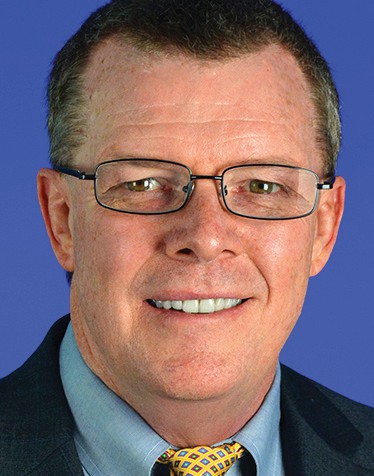 “When you read into the methodology used by Redfin’s economist, they use the term that they could be family trust for personal use, and that’s code for a second home,” said Ken H. Johnson, Ph.D., a real estate economist at Florida Atlantic University. “Those aren’t really investor properties. A lot of what is driving the size of the percentage is second-home purchases in Florida, and it’s in the name of a family trust just for estate planning. Yes, we’re having a lot of people come in and buy homes, and we’re absolutely seeing more corporate and investor purchases. But is it an invasion? It’s a very small one if it is.”

Beyond corporate entities, investors include people. Some are wealthy individuals or wealthy families, some form small LLC partnerships in order to pool enough money to invest in a few homes, but others simply have been lucky enough to end up with extra money in their pockets. 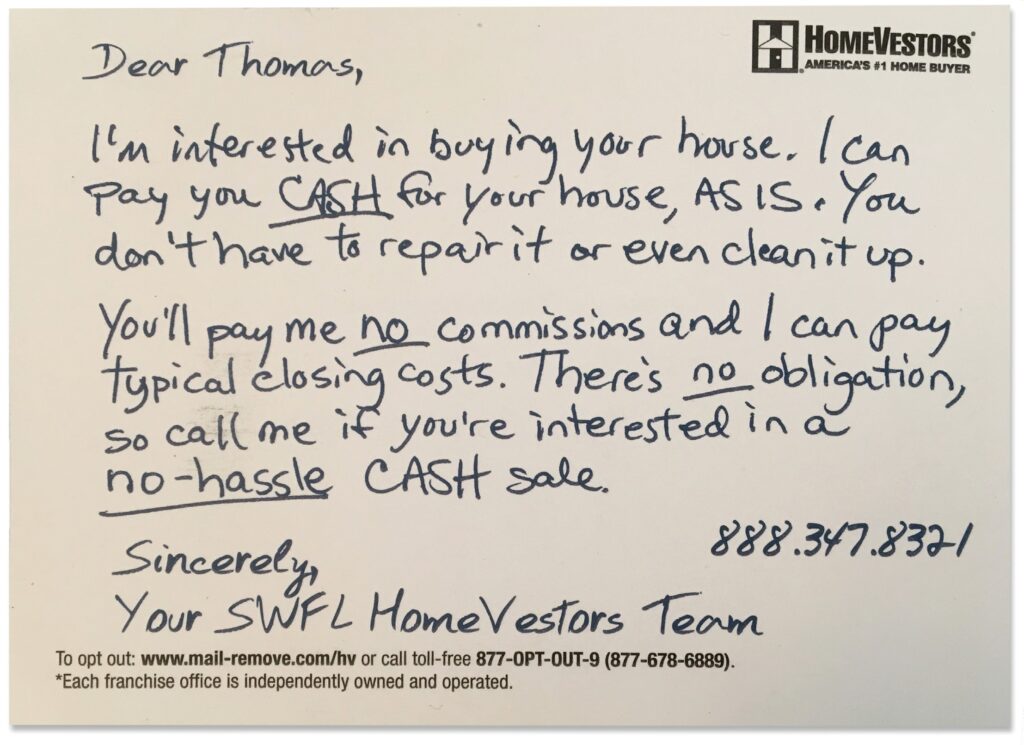 “We have a lot of investors from Miami right now,” said Roxann James, a Realtor with Coldwell Banker Realty in Fort Myers whose territory covers Charlotte, Lee and Collier counties. “People coming from Miami, Chicago, New York — they’re not investors in my eyes. They just have the cash from the sale of their $500,000 three-bedroom, two-bath, 1,400 square-foot home, and down here they can pick those up for the upper $200,000. So, they’re using the cash from the sale of that property, getting a newer home outside of the major metropolitan areas and walking away with a little bit of profit. They’re coming over here, buying one (house) to live in and using the profit off the rest of it to have another house built, or just buying a couple of homes, fixing them up a little bit and flipping them to resell.” 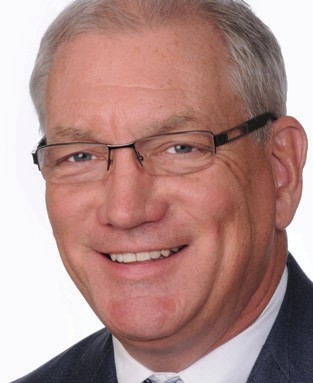 “Europeans like the United States because we have low taxes, and our economy is usually one of the safer in the world, so there is a definite placement of funds here,” said Chip Olson, the broker for RE 1 Advisor in Naples, whose clientele traditionally have invested in commercial real estate but are now venturing into investing in residential properties.

Mr. Olson said he has heard rumors of hedge funds entering the area’s residential market, but he has not personally encountered such investors. He said taxes are playing a role in prompting a small percentage of his clients, who previously had always purchased commercial properties, to now buy residential. When investors sell a property, they must reinvest into another investment property because of capital gains. This is referred to as a 1031 Exchange, named after Section 1031 of the United States Internal Revenue Code. Mr. Olson said there is currently a shortage of commercial properties for sale in Southwest Florida because new construction stopped for about five years as a result of the Great Recession, and many other properties are owned by the businesses occupying them. With few commercial properties available, he said, about 10% of his clients have ventured into purchasing residential properties to complete their 1031 Exchanges. 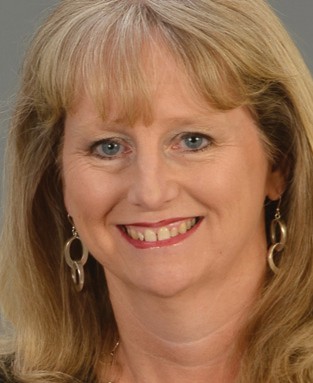 Commercial real estate wasn’t the only category where new building starts plummeted during the recession.

“The (Redfin statistics) provoke this image of the BlackRocks of the world coming and bidding up the price of everything, running rents sky high, but that’s not the problem,” Mr. Johnson said. “It’s an inventory shortage, as well as the popularity of Florida. People want to live in Florida rather than in colder climes, some want to live here for a better business environment, and then clearly there have been pandemic relocations. Our inventory shortage was 15 years in the making after the last housing crash, in both multi-family and single-family homes, because the development of those fell sharply. It’s really come to the forefront in the last several months, and it’s not going to be solved in the next several months. It will be years.” 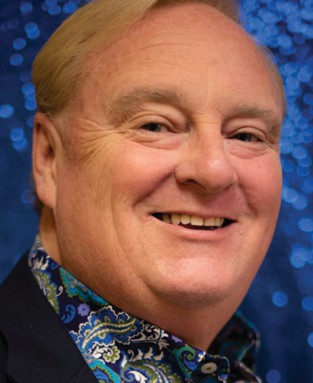 Interestingly, investors may actually play a role in solving the housing inventory shortage. Ms. James said fewer owner-occupied homes are coming onto the market because people are afraid they won’t find another home to buy. She said investors are also slowing on buying existing homes because their goal is to find deals and recoup a return on investment. That’s hard to do if houses are selling at a premium. So, investors are turning their attention to a different part of the residential market: vacant lots and homebuilding.

“Investors seem to be coming out of the woodwork because of the economy here in the U.S.,” said Kurt Hoenig, a Realtor with Coldwell Banker Realty in Fort Myers whose territory covers from Nokomis to Naples and east to LaBelle. “The percentage is higher of foreign investors, international but also continental because we’re getting a lot of people from Canada again. Some of them are buying existing homes for rentals, but some are investing in the long term, which is building affordable housing and turning it back over. In today’s market, it’s still at a decent profit that is realistic and attainable but not greedy.”

Ms. James and Mr. Hoenig have recently worked to piece together vacant lots in Lehigh Acres that are within a few blocks of each other so that building materials may be delivered to a central location, and then connect with local builders to provide convenient one-stop shopping for small investors. Mr. Hoenig said he has also seen families who move to Babcock Ranch buy more than one lot and have additional homes built alongside their own home so that they have houses to rent out. He does have some investors looking for large parcels to hold in hopes of future developments, and they are looking around LaBelle, Alva and Lehigh Acres since inland is where the undeveloped land is still available. Ms. James said she has seen some people who have been so keen to get in on the current real estate boom that they have taken out home equity lines of credit on their own residences and used the money to build houses to sell for a profit.

“They’re basically using their profit on their existing home, and the interest rate is typically a little better than getting a construction loan,” Ms. James said. “And the money is free-flowing, so once you put it back in and you’re not paying the interest on it, you can turn around when you’re ready and borrow the funds again.”

While investment may spur an increase in housing inventory in a couple of years, that news likely comes as cold comfort to families bidding against cash investors as they simply attempt to find a place to live today as local rents climb. And while a flipped house that an investor has renovated sounds nice, some first-time buyers need that bargain fixer-upper because they have more sweat than monthly mortgage money to spend.

“These poor families that are first-time homebuyers or just average working class people, they don’t have the cash to come in and buy, and the majority of those buyers are losing out to cash buyers, whether they’re investors or not,” Ms. James said. “They’re coming down here with cash, and they’re beating all of the average everyday residents out. The FHA buyers aren’t getting the homes like they’ve been able to in the past because the cash buyer is almost always going to win the bid over somebody who’s financed or a VA buyer. You have so many other different types of people out there that are using grant money and down payment assistance. They’re just unable to get in on these low interest rates in order to buy because of the cash buyers that are out there.”

“There has been a lot of frustration on our part with trying to get a contract in on a home because you’re up against an investor who usually has very deep pockets and, with an escalation clause written into the contract, sometimes you just can’t compete with that,” Mr. Hoenig said. “The escalation clause basically reads that we will go X amount of dollars over your highest and best offer, up to a certain point. It’s aggravating trying to get a first-time homebuyer into a home that just comes on the market, that is at the perfect price point for them, in pretty decent shape and doesn’t need a whole lot — and outbid the investor.”

As to what investors do with the existing houses they purchase, it varies. If they don’t fix and flip, the houses become rentals. In some cases, the families who were outbid may have the opportunity to rent the homes. However, others leave the housing market for residents to become short-term Vrbo or Airbnb vacation rentals. However, over time, the investors will likely return the homes to the market.

“So, is there more corporate buying?” Mr. Johnson said. “Yes. Is it dramatic? No. In general, it’s good for the market because it actually creates liquidity, which allows people to bring their homes to market and sell in a quick manner without fear of taking a tremendous loss of value. So, you want liquid markets, and historically, housing markets have been very illiquid. Corporate buyers are simply responding to the inventory shortage, which just happens to correlate with the same time that there is this massive movement from the Northeast and Midwest to warmer climes. There’s not a bad guy or boogieman in this story. Population growth solves all real estate problems in the long run. But in the short run, population expansion — or popularity, if you will — creates havoc in real estate. But, in the long run, this is exactly what you want.” ¦