How low can it go? Well, lower than ever apparently when it comes to consumers who think it’s a good time to a home.  The total fell 1 point to a record low of 25 percent in January while 70 percent said the time was not right, a 4 point increase. This brought the net of positive responses down to -45 percent, 60 percentage points below its level a year earlier and an all-time low.

Those opinions, along with answers to three other questions in the National Housing Survey knocked Fannie Mae’s Home Purchase Sentiment Index (HPSI) down 2.4 points from its December reading to 71.8, and 5.9 points below its reading in January 2021. 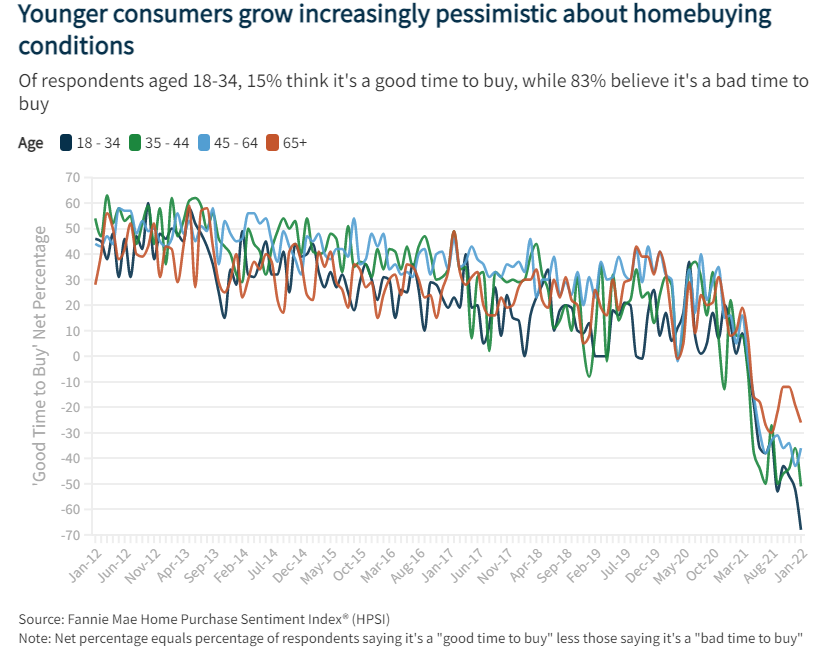 “Additionally, while the younger respondents are typically the most optimistic about their future finances, this month their sense of optimism around their personal financial situation declined. All of this points back to the current lack of affordable housing stock, as younger generations appear to be feeling it particularly acutely and, absent an uptick in supply, may have their homeownership aspirations delayed. On the whole, the latest HPSI results are consistent with our forecast of slowing housing activity in the coming year.”

The same question regarding current conditions for selling a home also revealed some growing pessimism, although net positive answers were still near historic highs.  Sixty-nine percent of survey respondents felt it was a good time to sell, down from 76 percent in December, while “bad time” answers rose 5 points to 22 percent. This put positive answers at a net of 47 percent, compared to 59 percent the previous month but 23 points higher year-over-year.

The remaining questions that saw declines in their net positive responses were those dealing with mortgage rates and job security. The net percentage of consumers who expect mortgage rates to decline was unchanged at only 4 percent and the net of those who expect rate to go down dipped 2 points to a negative 54 percent. Consumers who said they were not concerned about losing their jobs dropped 5 points to 61 percent.

Net positives increased for only two components. Higher home prices were expected by a net of 29 percent of respondents, a 4-point gain, and 12 percent reported higher household income than a year earlier, a 6-point increase.

The National Housing Survey from which the HPSI is constructed, is conducted monthly by telephone among 1,000 consumers, both homeowners and renters. In addition to the six questions that are the framework of the index, respondents are asked questions about the economy, personal finances, attitudes about getting a mortgage, and questions to track attitudinal shifts.